Ready to come back to work? Get up to 50% off the Office of the Week! Book your showing today.

“Nothing I teach you tonight can be found on Google,” Bear Standing Tall explains. “This information has been transmitted from elders, and from traditional Indigenous knowledge.”

After introducing himself, he sings a traditional Honor Song, the subtle sound of his handheld drum reverberating softly through the suddenly sage-infused lounge of the Centre for Social Innovation at 215 Spadina. Packed tightly into narrow rows of chairs, his audience inches forward, trying to catch a glimpse of the colorful Medicine Wheel that has been laid upon the ground — a fabric educational tool “from before the days of PowerPoint.”

Originally from Onion Lake Cree Nation, Saskatchewan, Bear Standing Tall is a social entrepreneur, an educator, and a self-described ‘elder-in training.’ He is also the founder of Bear Standing Tall Corporate Training (BSTCT), a company that specializes in cultural sensitivity training designed to create bridges between Indigenous people and non-Indigenous allies.

On Thursday evening, Bear Standing Tall facilitated a workshop for CSI members on smudging — a traditional Indigenous ceremony in which dried herbs or medicines are burned to cleanse the air of negative energy, creating an appropriate space to communicate with spirits and ancestors.

“Similar to having training in construction. You’re not allowed on a construction site if you don’t have First Aid or CPR training,” Bear Standing Tall tells me. “If you’re going to work with my people in our backyard, you should have some fundamental knowledge about our philosophies and our relationship with the land.”

In Canada, discussions surrounding reconciliation are often steeped in the language of politics. For example, the majority of the Truth and Reconciliation Commission’s 94 Calls to Action are directly addressed to Canada’s federal, provincial, and territorial governments. Yet reconciliation also requires a transformation of the relationships between Indigenous and non-Indigenous people.

While continuing to advocate for institutional change remains essential, people across Canada are also searching for ways to promote reconciliation efforts in their personal and professional lives. BTSC aims to facilitate these efforts by instructing non-Indigenous individuals, organizations, and government entities on how to build foundations of allyship, trust, and mutual respect.

Though typically conducted at cultural events like potlucks or a Sun Dance, smudging is increasingly common in workspaces, government buildings, hospitals, and in daily life. In a corporate or organizational setting, smudging can be used to reduce tension or as tool for conflict resolution. It also has therapeutic uses — Bear Standing Tall recently smudged the late Gord Downie, who was battling terminal brain cancer.

The purpose of Thursday’s two-hour workshop was threefold. First, to familiarize participants with the fundamental skills and best practices required to conduct a smudging ceremony — how to make a tobacco tie or the importance of locating fire alarms; second, to impart an appreciation for the Indigenous worldviews and philosophies that inform the smudging ceremony; and finally, to explain the traditional protocols for working with Indigenous people, and especially Indigenous elders.

For example: smudging, we learned, can be conducted using one of the four sacred medicines — sage, tobacco, sweetgrass, or cedar. The spiritual significance of these medicines are related to the four cardinal directions of the Medicine Wheel — a complex spiritual metaphor common to many Indigenous cultures across Turtle Island. When collaborating with Indigenous people or elders, one should be aware of the significance of each herb, and follow the protocols for its exchange.

“For [Indigenous people] there are spiritual protocols that are more important than money. When you offer tobacco to an elder, that tobacco is more sacred than a contract,” Bear Standing Tall explains. “We have natural laws we have to abide to. To respect the universe and the spiritual way of life, these [protocols] have to be done properly.”

Following the workshop, I chatted with several participants, many of whom were eager to discuss what they had learned about the Medicine Wheel and other spiritual concepts. Others marveled — somewhat sheepishly — at their own lack of knowledge: “I can’t believe I didn’t know some of this stuff!”

Most importantly, however, each of the participants I spoke to recognized opportunities to leverage their new knowledge within their personal or professional lives.

“I work a lot with Indigenous artists, because I think art is a very important site of reconciliation,” explained Ceilidh Wood, who works with the arts service organization Ontario Presents. “What we learned tonight is really going to help me when I collaborate with Indigenous artists, or ask them to lead or participate in workshops. That’s super key.”

These, of course, are exactly the types of bridges that Bear Standing Tall is determined to build, and to fortify.

“There’s no word in our language for reconciliation,” he points out. “We understand it as healing together. When we share this knowledge, it’s so that we can both benefit, and heal together. And lead together.”

This event was part of our How To Be An Ally series. Our next event with Bear Standing Tall is How to be an Ally: The Experience – Healing the Sacred Circle. Please join us for and learn in a non-colonized way about The Doctrine of discovery, Terra Nullius, The Indian Act, Reservations, The Pass System, Treaties, Residential Schools, Missing and Murdered Indigenous Women and Girls, Healing the Sacred Circle, The Four Sacred Gifts for all Humanity, and Learning to be an Ally with Indigenous Peoples.

CSI and HackerYou launch new initiative to level up, build tech capacity in the impact sector

The Centre for Social Innovation has always been a supporter of HackerYou. In fact, it's where we got our start. Our CEO Heather Payne started… 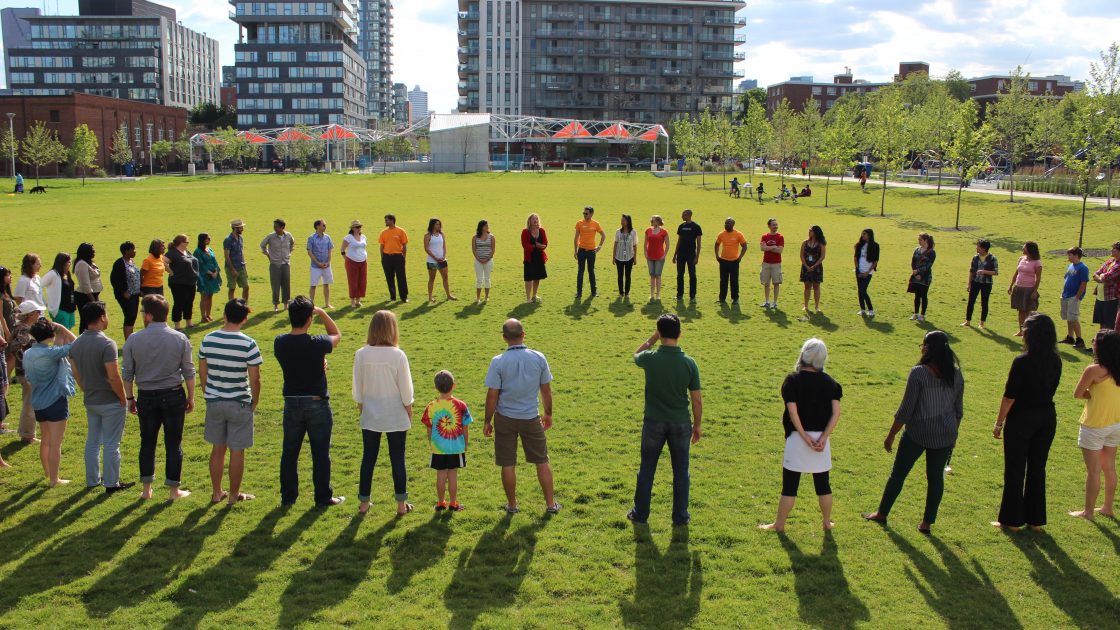 Barnabe Geis is the Director of CSI's Climate Ventures, an incubator for climate entrepreneurs, innovators, and leaders. He recently published a piece in the National…