Creating a Platform for Indigenous Innovation: A Conversation with Jeff Cyr – Centre for Social Innovation

Around the world, there are movements calling for systems change: a world that is sustainable, equitable, and prosperous for all. But what will that world look like, specifically? How are we each going to play a role in defining those specifics? Next Economy Conversations, our newest event series, brings the people building systems-level solutions into conversation so we can answer those questions, and learn from their successes and failures.

This month, our CEO Tonya Surman caught up with longtime friend and accomplished innovator Jeff Cyr. His tenure in government and impressive list of leadership positions led him to found Raven Indigenous Capital Partners, where he has continued to empower Indigenous communities and innovators.

Jeff spoke on a range of topics, including barriers to innovation in government, closing gaps faced by Indigenous social enterprises, and an exciting social finance model that puts solutions back into the hands of communities.

The conversation left us all amazed and inspired. In case you missed it, you can glean some highlights from our recap below (or watch the recording above).

The government is not built for innovation 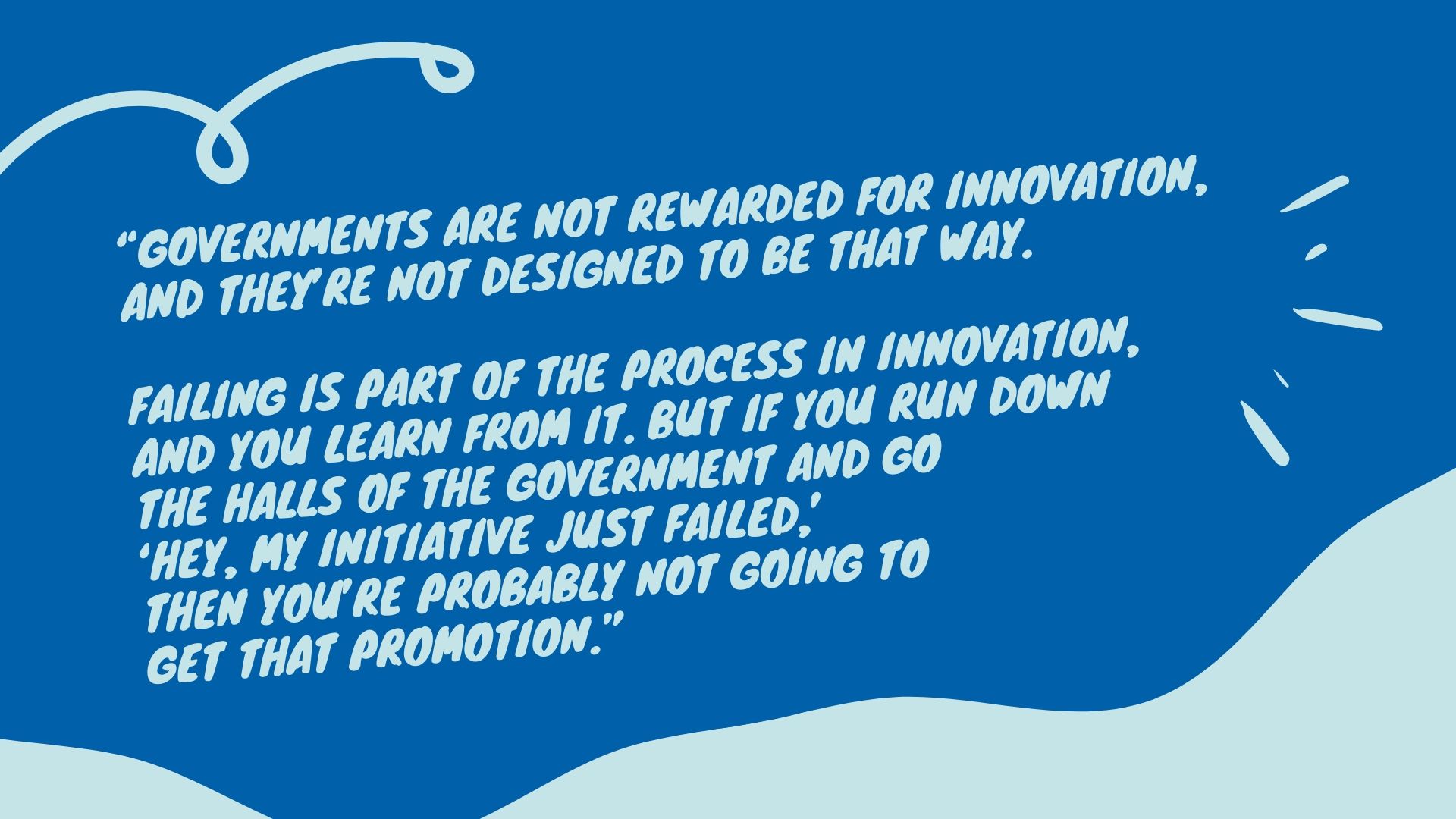 Before Jeff founded Raven Indigenous Capital Partners, he spent about a decade working in the Canadian government. His time there gave him perspective on the opportunities — and limitations — of our existing systems.

“It was massively rewarding and massively frustrating at the same time,” he said. “As an Indigenous person working there, you kind of look at it and go: ‘well, do we really want to make change? Because if so, why are we doing these policies and these programs in this way?’”

The caveat with government-funded projects, Jeff said, is that the government is often unwilling to give up ownership. They also tend to be laser-focused on reporting and hitting measurable goals. You could almost call it tunnel vision: not only does this behaviour impede the creativity of the teams they employ, the solutions that come out of the project are inefficient, and may not even address the problem they were trying to solve in the first place.

This fixation on output rather than outcomes holds back innovation: “Governments […] are not rewarded for innovation, and they’re not designed to be that way. Failing is part of the process in innovation, and you learn from it. But if you run down the halls of the government and go ‘hey, my initiative just failed,’ then you’re probably not going to get that promotion.”

What the government can do well, said Jeff, is contract administration. There are so many individuals and institutions that have lived experience of the problems they want to solve. These people also know how to innovate and get things done. By engaging and empowering them through government contracts (and giving them the autonomy to do what they know will work), the government can effectively tackle systems-level problems through innovation. 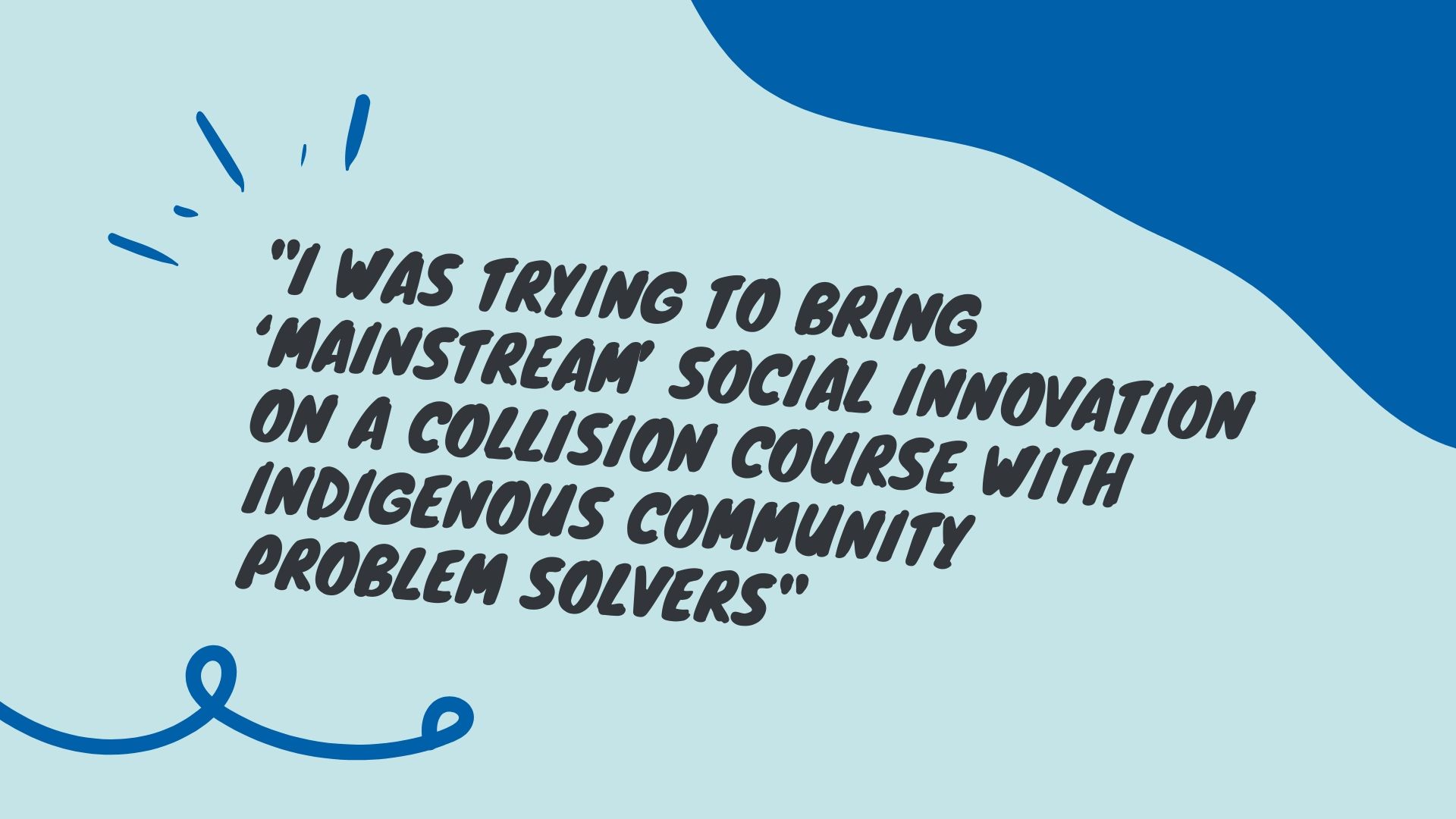 After working for the government, Jeff became the Executive Director of the National Association of Friendship Centres (NAFC). During his tenure, he spoke with dozens of Indigenous entrepreneurs, identifying the barriers they face to growth.

These discussions led to the inaugural Indigenous Innovation Summit, a three-day conference that gave a range of stakeholders a seat at the table. They discussed the language of social innovation, highlighted Indigenous innovation projects, and explored the opportunities in social finance.

“I was trying to bring ‘mainstream’ social innovation on a collision course with Indigenous community problem solvers,” explained Jeff.

The idea of an Indigenous intermediary came to him 4-6 months after the summit. Founders had continued to reach out to him to ask where they could access capital. And his conversations with Indigenous entrepreneurs leading up to the summit revealed massive gaps in this area.

“What didn’t exist was Indigenous investment vehicles. That’s the problem. Given those who approached us, we said: ‘We need Indigenous equity. I wonder if we can raise capital from the non-Indigenous world to invest in Indigenous enterprise and prove that this can be done.”

In 2017, Raven started with a $5M demonstration fund. They expect to close between $15-18M this September.

They just completed their sixth investment in mid-June. (It can be done, even during a pandemic!) And all of their ventures so far are promising. Animikii, a digital agency that has done groundbreaking work in Indigenous digital sovereignty, and Cheekbone, a sustainable beauty brand, are just two examples. Both have seen explosive growth.

Jeff explained Raven’s investment approach: “We are an impact-first fund. We’re not there to be extractive of value. We’re there to help business grow […] in keeping with Indigenous epistemology and in keeping with what the business owners really want to do with their business at the end of the day.” 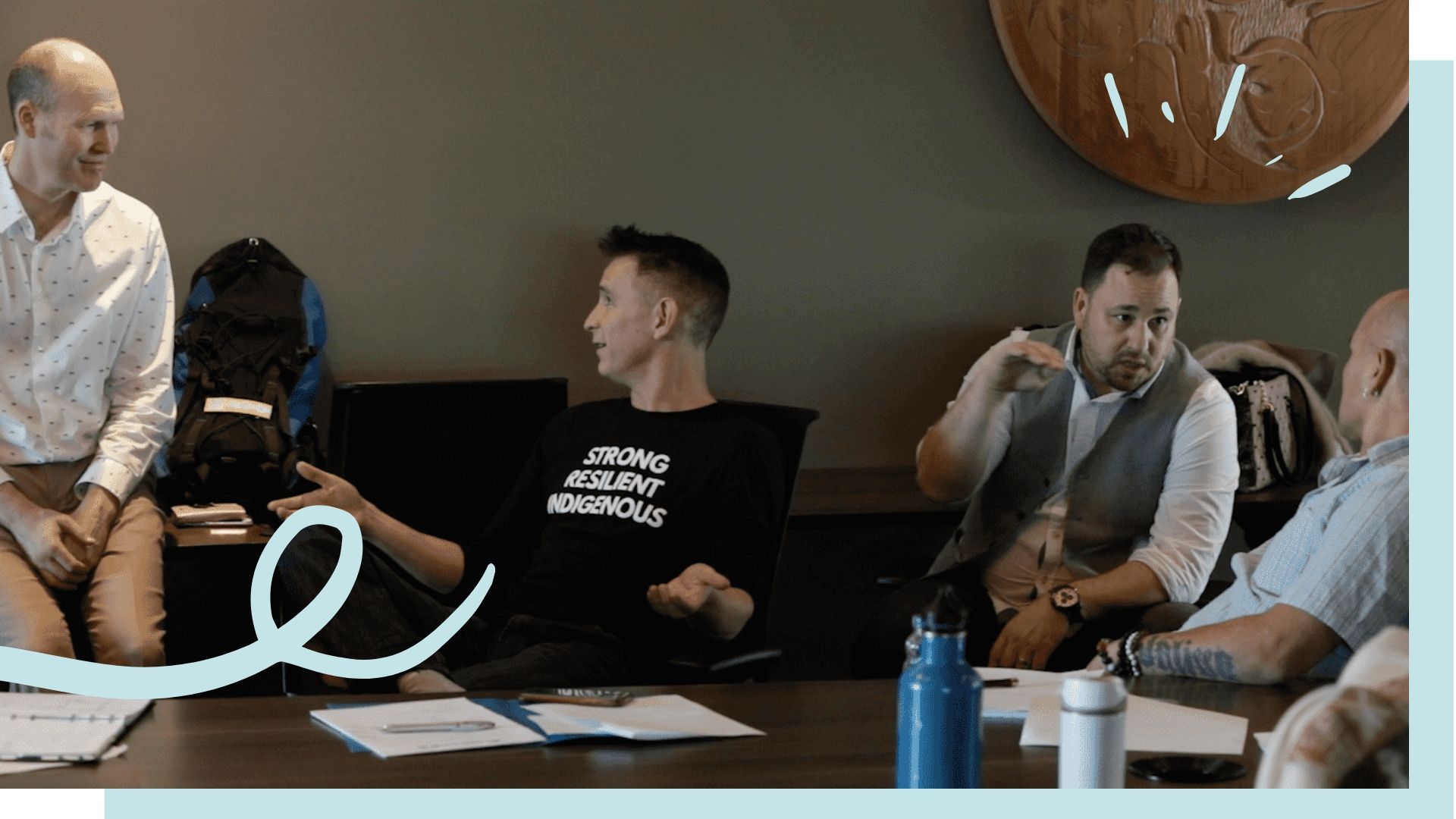 Raven Capital’s Community-Driven Outcomes Contract (CDOC) is a social finance model that places control of solutions into the hands of the beneficiaries, rather than external parties that don’t fully understand the problems they’re trying to solve. The community in question will get to determine its priorities and how it’s going to get there before they look for capital.

“It has flipped the power dynamic,” said Jeff.

In 2017, a social enterprise called Aki Energy put in a proposal to the Indigenous Innovation Demonstration Fund. Their idea was rejected — not because it wasn’t viable, Jeff explained, but because the funds wouldn’t do anything for the problem they were trying to address.

Aki Energy was trying to reduce the barriers that prevent Indigenous communities from accessing clean energy, employment, and energy sovereignty. It was a policy problem, and it was a problem worth solving. So the McConnell Foundation (one of the backers of the fund) spearheaded a peer input process to see how they could help Aki Energy bring their idea to life. Jeff was invited to participate.

“An unusual cast of characters sat around the table to problem solve, and [Aki Energy] turned their back while we talked among ourselves,” he recalled. The process was unique — and empowering.

Remember, funded projects tend to be inefficient because of two things: a focus on outputs, not outcomes, and an inability on the funders’ part to relinquish control of decision-making. The investment innovation coming out of this process tackled both problems. Jeff explains:

“We thought: Why don’t we upfront the investment from private investors, and tag a rate of return based on success — a pay-for-performance model […] The Indigenous social enterprise leads and installs with the cooperation of the band. The band becomes owners of the social enterprise at the end of the day. Once they hit success, the outcomes buyer — the government — would pay [the private investors] back with a rate of return.”

And so, the CDOC was born. Raven Capital took on a role as a middleman. For each project, they have contracts with the government, the investors, and the service provider.

As Jeff’s team built out this new investment vehicle, they innovated along the way. (That’s how the idea of a rate card — one that values social outcomes as much as economic ones — was created!)

It was a genuinely collaborative process, intentionally taking more time to build a relationship with the community and ensure their needs are met.

“Everything we do is in relationship. So we will often say ‘we are now going to be in relationship with each other,’” explained Jeff. “At the end of the day, when things get tough you rely on relationships to see you through. So we spend an inordinate amount of time building relationships and trust. We go into communities, we host meetings there.”

Today, Raven Capital is working on their second CDOC project: a suite of interventions for the diabetes epidemic within Indigenous communities. As with Aki Energy, Jeff and his team hope to prove that the solution works in one community, then scale it across the country (and the world)!

In actuality, the CDOC is applicable to most community-level problems — and there has been a lot of interest internationally. But as Canada’s first Indigenous intermediary, the Raven Capital team is committed to creating change at home before going anywhere else.

“We’ll lend our expertise as we can,” said Jeff, “but we see ourselves as having direct obligation to Indigenous communities in Canada first. So we’ll concentrate here and when we have the bandwidth, we will expand.”

Reading our recap of this conversation is one thing. Hearing these words directly from Jeff is another. Remember, you can watch the full recording of our conversation here, or do some further reading at the links below.

Want to hear more from the leaders building the Next Economy? Save the date: July’s edition of Next Economy Conversations is taking place on July 22 at 12pm! 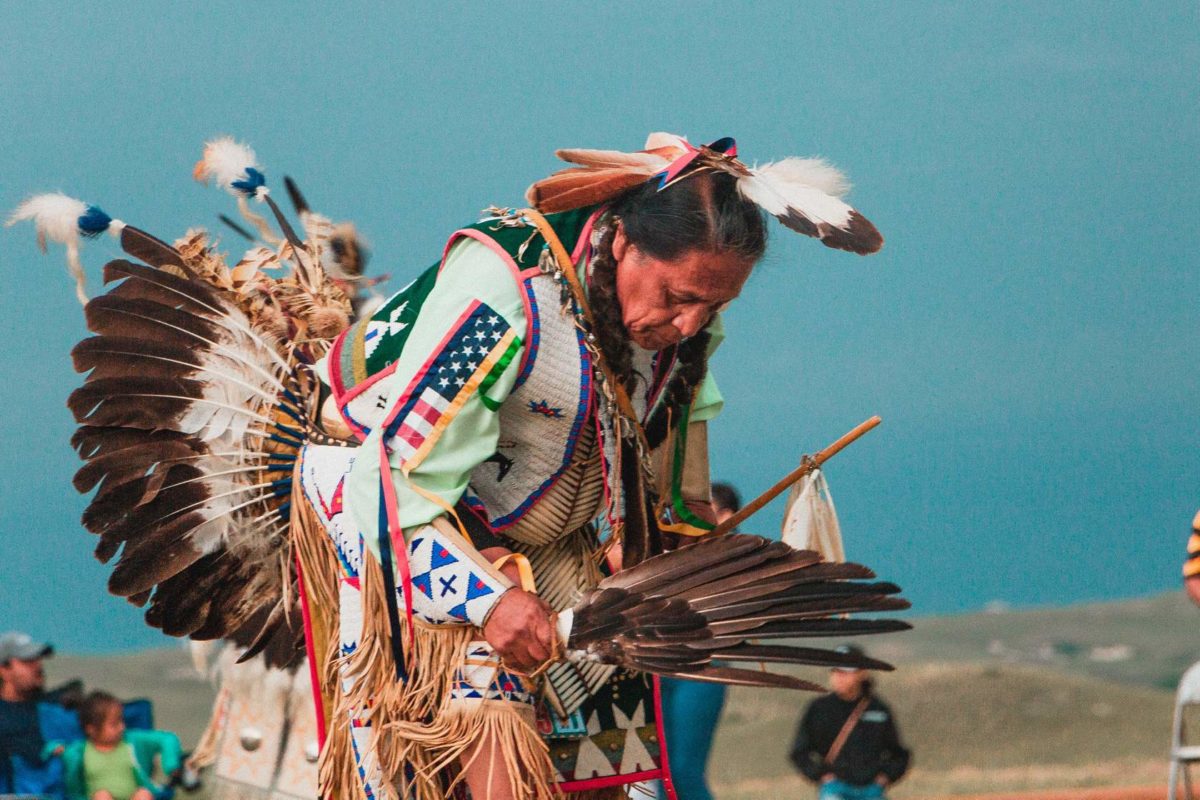 For too long, the history of Canada’s Indigenous Peoples has been purposely forgotten. In school, what little we learn about Indigenous peoples is told from… 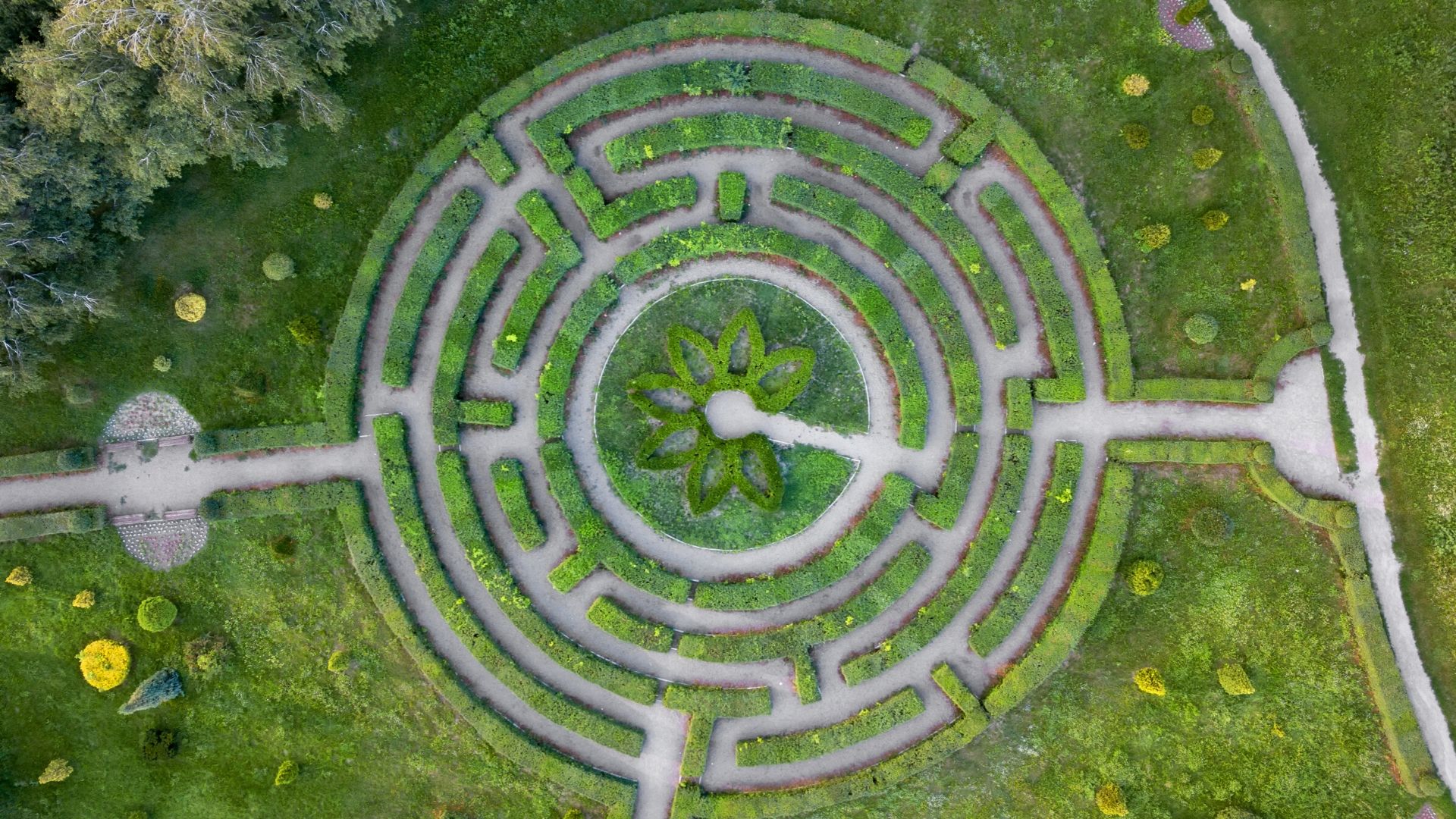 The Centre of the Maze: A Conversation with Bill Young

Around the world, there are movements calling for systems change: a world that is sustainable, equitable, and prosperous for all. But what will that world… 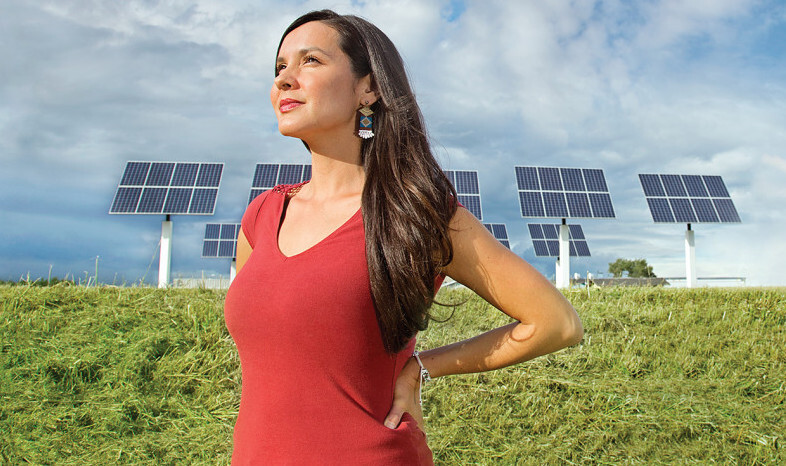 CSI’s monthly Climate Ventures Mornings are a chance to hear from climate solutions innovators and leaders. We were honoured to sit down with climate justice…