Can we make Toronto safer for cyclists? – Centre for Social Innovation

How safe is cycling in Toronto? CSI members and staff were interviewed for this CityNews piece discussing a Forum Research poll that showed two-thirds of Torontonians don’t feel the streets are safe for cyclists.

We followed up with Liz Sutherland (Director of Advocacy and Government Relations at Cycle Toronto, pictured above) to learn more about the findings of the study, and find out how CSI members can help make the streets safer for Toronto cyclists.

What is your biggest hope for Cycle Toronto? What does the world look like if all those hopes come true?
My biggest hope is that cycling becomes so safe and ordinary all across Toronto that we no longer have to do advocacy work… so we can simply organize fun group rides all the time! That era is still a long way off, however, so my hope in the medium-term is that people who bike in Toronto recognize the importance of a member-driven nonprofit that advocates for safer streets for all.

Are there things you wish you’d had the chance to say in the Global interview?
The news item focused on the polling we did with David Suzuki Foundation in July, showing that the vast majority of Torontonians, including 75% of drivers, support protected bike lanes and want to see safer streets for all road users. I talked about the need for protected bike lanes across Toronto and I would just add that we also need to see blanket reductions in speed limits, supported by street re-designs and safer intersections (check out our demo at Open Streets) throughout the city. We are working as part of a coalition to promote #BuildTheVisionTO, a set of recommendations that would get us a long way toward safer streets in Toronto during the next term of City Council.

What are the differences and similarities in concerns of urban cyclists and suburban cyclists?
The bottom line is that we all just want to be safe. We don’t want people to have to be brave to ride a bike in Toronto, no matter where they live. We all want protected infrastructure for biking so you don’t get the conflicts and collisions we see when motor vehicles and bikes have to share space. That looks different in the suburbs, where people biking often have to deal with higher motor vehicle speeds and would benefit from bike lanes in the boulevard of main streets next to the sidewalk. In the urban core, obviously we have higher volumes of people riding and a lot of motor vehicle congestion, so downtown the concerns focus on the conflicts you see in crowded streets and intersections.

How can CSI members (or anyone!) get involved in Cycle Toronto?
We love it that so many CSI members ride their bikes regularly and we’ve found it extremely supportive being part of the CSI community from Day 1! There are many ways to join the movement for a safe, healthy and vibrant cycling city for all. Here’s a sampling:

What is one piece of legislation that you think would make the streets safer for cyclists?
It’s difficult to choose just one! At the City level, I would say it would be a bylaw mandating that every time a street is reconstructed, it has to be rebuilt along “complete streets” principles, creating safe space for people of all ages and abilities, no matter how they travel. Provincially, I would like to see a genuine vulnerable road users (VRU) law similar to BIll 158 which didn’t make it through the Legislature before the last election. VRU laws exist in nine American states and they increase fines for drivers who kill or seriously injure people travelling with mobility devices, on foot, or by bike. They act as a deterrent to dangerous driving behaviours and are intended to increase the care that drivers take around people travelling without steel cages and airbags.

Bonus question: What is the best song about bicycles?
You’d be surprised at how few commercially-recorded songs are written about the joys of riding. I don’t know why David Byrne hasn’t done one yet. There’s a bit of a French theme in songs about bikes: “La Bicyclette” by Yves Montand, Kraftwerk’s “Tour de France,” and the syrupy “Bicyclettes de Belsize ” sung by Engelbert Humperdinck. Most people think Queen had the final word with “Bicycle Race.” And my coworkers recommend “Bicycle” by Memory Tapes as a dreamy soundtrack for a summer evening ride. But I would have to go with Propagandhi’s punk rock “Hadron Collision” as it is cathartic to listen to after a day of riding a bike with courtesy and care on the streets of Toronto!

Want to be a member at a place where people can readily name six different songs about bikes? Join us!

Come try us out. Be an Innovator for a Day. 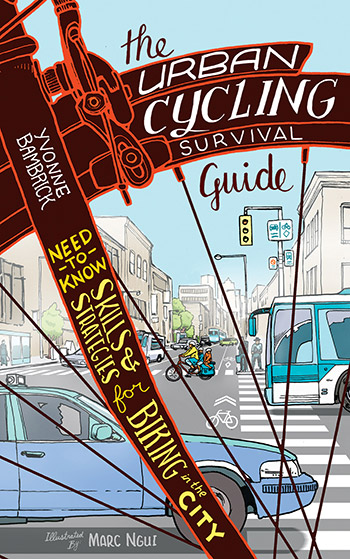 Bicycles are pretty popular amongst CSI members—in fact, the demand was so great at CSI Spadina that our members managed to get the City of Toronto to pilot the very first on-street bike-parking corral outside our front door. If you’re not already riding a bike, perhaps the appeal of predictable travel times, door-to-door transportation, freedom of movement, fun, health benefits, saving money and free parking are enough to finally motivate you to give it a try.

Nine CSI members who are protecting the earth

CSI is filled with green innovators, from staff to visitors to of course our amazing members. This Earth Day, we’re taking the chance to highlight…

A celebration of Green Innovators

To celebrate Earth Day 2018, we tweeted out profiles of phenomenal Green Innovators across sectors, throughout history, and around the world. Take some time to…