Four years ago the wheels were put in motion for the Centre for Social Innovation to leave our first location (which was the first co-working space in the world), and move across the street to a building we were able to buy through support from our community. A handful of days before that move, our 192 Project and Community Coordinator Kale Ridsdale circulated a heartfelt and moving letter to members via the listserve for the salad club countdown, about what we were about to undertake and all the things that got us here. Her words were the perfect way to let remaining members of our community know we’ve left 215 Spadina, and set the stage for world-changing things to come at 192.

Here we are Spadina!

The final Salad Club at 215 Spadina, and 3 sleeps ’till our move.

These final few days will be action-packed, but it is Sunday evening as I write this, in the 4th floor lounge. It’s still in a state of disarray from the Wine and Cheese earlier Friday evening, but I’m taking a moment to reflect on the history of this building before I tackle that situation.

I was only just starting as a new DECA at last year’s Wine and Cheese, held in the same place on the same floor. That night, I didn’t recognize a single face around me. I didn’t even really know exactly what CSI was, what the people here were doing, and who just showed up for the wine.

Through preparing to move CSI Spadina out of this building, I have come to learn about and be humbled by the history contained within. I’ve learned where the fake flowers in the kitchen came from (the bicycle of one of CSI’s founding members), that some of furniture pieces were found on the street by our CEO Tonya Surman, and that some of our carpets were already here when we moved in. I’ve learned about the origin of Salad Club, where the library came from, and which of you have been here for a long time.

I can’t tell you how many times I had thought about throwing out those fake flowers. But I’m coming to learn that there’s fourteen years of collective intelligence that made CSI Spadina into what it is now, and this week we pack it all up into boxes.

A year ago at CSI’s annual Wine and Cheese I walked up to a stranger at the party and said, “I’m new here, introduce me to some people?”, and he did. A year later I was surrounded by friendly familiar faces, and the feeling of being home. Through preparing to move CSI Spadina I have also come to learn what CSI means to you, the community.

We might be hauling the contents of this building across the street over the weekend, but I’m clear that CSI is not its artifacts. I’m clear that what we’re packing into boxes are memoirs of what this collective intelligence has built, and that CSI doesn’t move until you all show up on Monday morning.

What I have learned in my year with CSI is that over this coming week I can trust the process and power of this community and that CSI Spadina will cocoon itself a new home across the road.

Do you want to be one of the first new members of our gorgeous 192 space? Find out how. 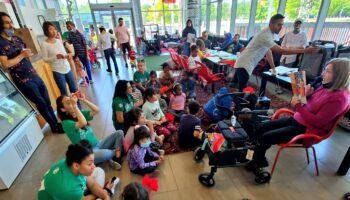