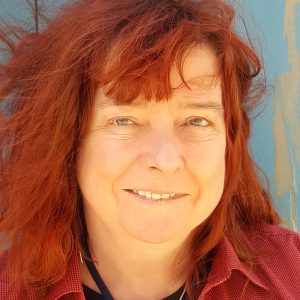 After attending two years of college for broadcasting, Deenie went on a hitchhiking adventure across Canada. In 1987 she opened a vintage shop in Kensington Market called Razzmattazz – there were endless ways to repurpose funky fabric on jean jackets or shorts and creating pirate shirts, sexy dresses or t-shirt silk screens was always fun. Deenie has also bartended at some of Toronto’s most iconic live music venues like Lee’s, the Cameron & The Horseshoe Tavern, which were a blast.

In 2017 Deenie became the caretaker for CSI Annex. The unity of caring for the planet felt comfortable. Her varied background was a great fit and she has become a valued troubleshooter for both the CSI staff and members.

When she isn’t at work Deenie loves to bicycle, read, grow food and share her cooking!