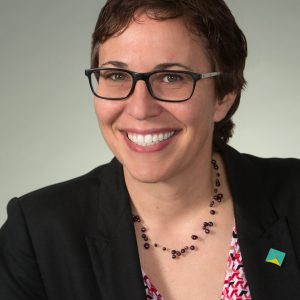 Rebecca is the CEO and transformational impact leader of the CMHA for York Region and South Simcoe.  Rebecca has been in senior leadership positions for over 23 years and considers herself fortunate to be enjoying a prolific career in the social profit sector.

She has earned nation-wide recognition for her leadership in community development, inclusion for persons with disabilities, LGBTQ rights, support for youth at risk, mental health and addictions, cultural competency, and innovation.  Rebecca plays an integral role in Ontario’s restructuring of the health care system, serving as an anchor partner of two Ontario Health Teams and part of three others.  She is leading the development of the York Region Mental Health & Addictions Crisis Hub, co-chairs the Region’s Human Services Planning Board, and chaired the Region of York’s Service Coordination Council for Mental Health and Addictions for its three-year mandate.

Under Rebecca’s leadership, CMHA York & South Simcoe as an agency has received numerous accolades, including Canadian Non-Profit Employer of Choice and being named one of Canada’s 10 Most Admired Corporate Cultures, and recognition across Canada as industry leaders in cultural competency and innovation.

She is a mental health advocate, philanthropist, and committed community builder who, after many years, has figured out that great planning inspires hopes and dreams and not the other way around.