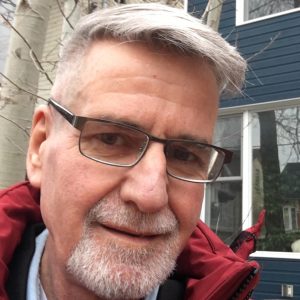 Robert grew up in the community of Kitchener-Waterloo, Ontario.

While initially his career plans were heading towards entering the ministry in the United Church of Canada, things changed a little. After getting a Bachelor degree in History from Wilfrid Laurier University and a diploma in Performing Arts Management from Confederation College, Robert entered the world of Arts Administration. He moved from positions of Box Office and Front of House Management and eventually Theatre Manager. His time in Arts Admin took him to many communities including Halifax, Nova Scotia and in Ontario, St. Catharines, Waterloo, Windsor and Toronto.

A career shift followed and Robert entered the field of hospitality management where he worked in restaurants and a private nightclub.

An important part of Robert’s life experience has been his volunteer work where he has been active with St. John’s Soup Kitchen in Kitchener, ON, Dancers for Life benefit performance, The Canadian Arts Presenters Association board of directors and Campus and Community Impresarios board of directors

Robert is true believer in a team approach to business operations – we are all in this together and the only way things are going to get done is by everyone pulling together as a team.