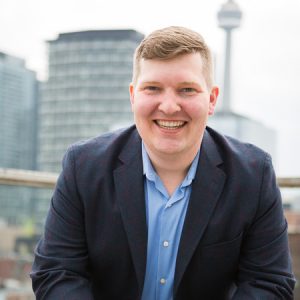 As a child, Will would not stop asking the question, “why?” until one day someone asked him if, “how?” might be a better question. He agreed and has never looked back. Asking the question, “how?” revealed a love of process, a deep appreciation for systems, and an obsession with measurement that saw him through a BA in Biochemistry from Grinnell College (Grinnell, Iowa) and an MBA from the Schulich School of Business. Along the way, he realized that the most interesting systems are human systems and the most delightfully complex processes are technical. As the Product Manager, Will sits happily in the middle of CSI’s technical processes asking his favorite question, “how?” while working to serve his favourite people – our Members and Staff.

It wasn’t just a love of systems, processes, and a good challenge that brought Will to CSI – it was the power of the Community. One networking event in 2014 sparked an intense desire to get involved, and five days later he showed up for his first shift as a DECA. In 2015, he joined the staff team as the Leasing Manager, and along the way he has made more wonderful friends than he could hope to and met more inspiring people than he could possibly imagine.

When he’s not at work, or gushing effusively about the CSI Community, Will loves being outdoors, cooking with friends, having deep conversations about just about anything, and laughing at just about everything.